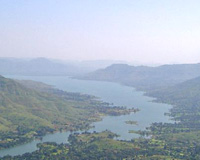 Located atop the Sahyadri mountain ranges on the Western Ghats of Maharashtra, at an altitude of 1353m (4438 ft), Mahabaleshwar stretches for 5 km from one corner of the town to the other. The coniferous forests in and around the hill resort plays a major role in determining its rainfall and climate. Bestowed with some of nature's choicest splendor, the place is a favorite holidaying destination among tourists, for its pleasant climatic conditions. The weather also facilitates the cultivation and growth of various soft fruits and berries, that adds to its variegated vegetation.

Summers
Summers, that generally lasts from March to mid-June, are generally warm. The temperature during summers rises to a maximum of 29oC. Days are warmer, though temperature drops down to a minimum of 16oC during the night. Because of its high altitude, the heat during these months is mild and welcoming. With the constant mountain breezes, the harshness of the summer sun is not felt here. The place generally remains packed with tourists from the nearby cities of Pune and Mumbai during the summer months, because of its mild and favourable climate.

Winters
Winters generally lasts from the month of November to mid-March and the climate is cooler. However, due to its close proximity to the warm water of the Arabian Sea, the hill resort escapes the extremes of nature during these months. Days are warm and pleasant and the sun is soft and solacing, unlike the urban sun. But during the night, the temperature may fall down to a minimum of 13oC. The place sees a lot of tourists during the festive months of December and January and becomes ideal for Christmas and New-Year revelries.

Monsoons
During monsoons (mid-June to September), the weather remains wet and extremely damp. But the incessant showers enhances the beauty of the place, and it emanates a charm during this season. Seasonal waterfalls abound the place and the forests and trees prosper in all their lushness. But the place virtually becomes uninhabited during this season, except for the locals, due to the continuous rainfalls.

The best time to visit Mahabaleshwar remains anytime between October and June. During the festive months of October and December, the place radiates a joyous spirit and remains packed with tourists.